Mr John Spink OAM was one of those upon whom Her Excellency Dr Jeannette Young AC PSM conferred a Medal of the Order of Australia at a ceremony late last year. 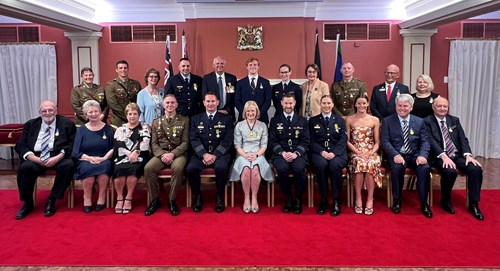 Do you know someone who has made a positive difference, served selflessly, or whose achievements contribute to our collective strength? Nominate them for an award here.

Mr Spink was recocognised for his service to Indigenous community health, as Chief Executive Officer of the North Coast Aboriginal Corporation for Community Health, assisting with the foundation of the Well Person’s Health Check Day.

While admittedly feeling honoured by the award, Mr Spink also acknowledged the high toll his work had taken on him personally.

He said that after 37 years working with First Nations people in Queensland and Alice Springs, such formal recognition came as something of a “relief”.

“I’ve had it a bit rough, like anybody who works in that field. You’re subject to a lot of things. I’m not an Indigenous person, so it’s more difficult to gain acceptance,” he said candidly.

“It’s a matter of knowing what you’re doing, ensuring your staff are doing well, and acceptance comes when it comes.

“I was pretty stoked, after all these years, finally being recognised. This one meant a great deal.

“I like getting pats on the back. I don’t get them very often!”

Mr Spink said he first started working with First Nation’s people in 1985, while employed in Alice Springs as the Manager of the Drug & Alcohol Services Association (DASA). He developed and managed a program that offered a safe and caring environment, as an alternative to going to the cells for the night, for people who were apprehended by police for being intoxicated in a public place.

He went on to give evidence to the Royal Commission into the Aboriginal Deaths in Custody in 1988/89.

He said the two Royal Commissioners at the time, James Muirhead and Elliott Johnston, both visited DASA on two occasions and were very impressed with the operation.

It was described by them as “the only shining light in an otherwise deep and dark tunnel”, he said.

The program was mentioned in the final Royal Commission report.

In the time he was managing it, until the time of his departure in October 1998, there had been 77,000 overnight admissions with no deaths occurring, Mr Spink said.

In 1998, Mr Spink was awarded an Australia Day Medal by the Alcohol and Other Drug Council of Australia for his effort in the reduction of harm associated with the use and misuse of alcohol and other drugs in the Northern Territory.

Upon moving to the Sunshine Coast in 1998, he was employed as the Executive Officer and eventually the Chief Executive Officer, of the North Coast Aboriginal Corporation for Health (NCACCH).

The organisation developed and implemented a unique health program called the NCACCH Brokerage Model for the First Nation’s people residing in the regions.

“The program is similar to that of a private health fund without any associated fees and gap payments,” he said.

“People have the choice of selecting their own doctor, dentist, mental health counsellor, podiatrist and many other allied health professionals at no cost to the client.”

He said the model was a first in the country and had been taken up and funded by the Federal Government in 2005.

Mr Spink retired in November 2019. He said while tough, his work had its own rewards.

“I recently got a postcard from a fella in Broome, in detox, who said thanks. It’s a real buzz when they do things like that, say thanks for helping me, I wouldn’t be alive without you.”

The Order of Australia is the nation’s pre-eminent awards system, representing the best of what we do across the breadth of who we are. From community volunteers to entrepreneurs, from artists to educators, all Australians are eligible for an Order of Australia award.

However, it relies on people to nominate someone they feel deserves recognition for their hard work, service, sacrifice and accomplishments, be they colleagues, leaders, peers or neighbours.