Governors of Queensland have flown this Personal Standard since 1876.  The Standard comprises a Union Jack with a white roundel in the centre featuring the Badge of the State of Queensland, a light blue Maltese Cross, surmounted by a Royal Crown and surrounded by a garland of laurel leaves.  If the Standard is flying at Government House, on a vehicle or at an event (for example a country show or a sporting fixture), this indicates that the Governor is present. 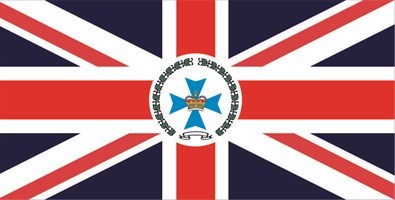 The general design of Standards for British Governors was approved by Queen Victoria in 1869.  The design for Governors of Queensland was created in 1876, when the Maltese Cross was adopted as the State Badge.